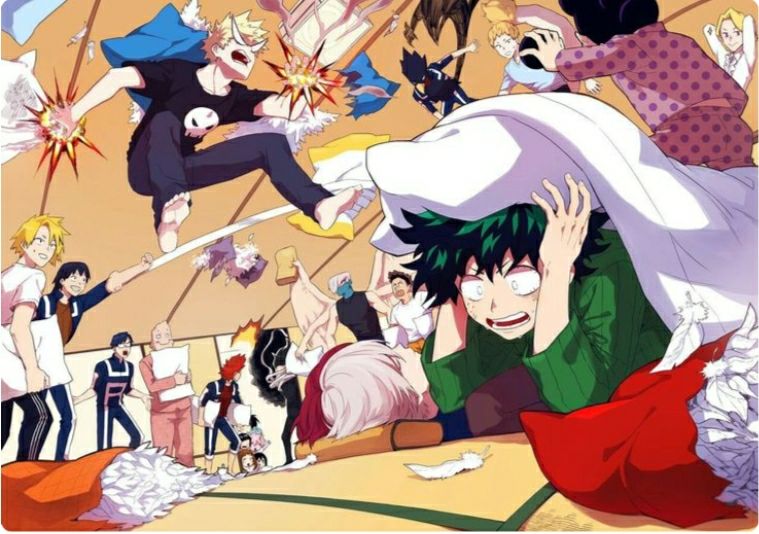 Today was one of those days where you wake up knowing everything is going to be great, which was rare when you’re in Class 1A. It was great because; one- Bakugou went home for the weekend so everyone should be calmer two- I finished my homework super early so no stress! And three- It was my birthday

I excitedly got out of bed and dressed in one of my best and favorite dresses. Brushing my hair, I grabbed my phone and headed down to the main room.

As the elevator doors opened, I heard the chatter of many of my classmates. I smiled to myself as I walked in.

My expectations for the party were too high as I learned to walk into the room.

They sat at what was usually a dining room table with papers and discussed. At the head of the table were Iida and Yaomomo. The others at the table were most of Bakugou’s team, minus Bakugou and Kaminari; Ojiro, Midoriya and Todoroki. And by the TV and couches was Tsuyu, Shoji, Mineta, Hagakure, Aoyama, and Sato.

I sighed to myself, the bounce in my step slowly receding as I walked into the kitchen. He quickly grabbed an apple and washed it before taking a bite of the juicy red fruit.

“So what are you doing?” I asked, interrupting my chatter as I leaned against the back of Mina’s chair.

“(Y/N), we’d rather you meet in the living room or somewhere else. We have important matters to discuss!” Iida interrupted Mina with a booming voice.

“Iida, wasn’t that a little harsh? They were just wondering what we were doing…”

“I know my words were harsh, but if we’re going to plan this birthday party for Kaminari, we don’t need any distractions!”

On Sunday, Bakugou Katsuki walked through the door of Dormitory 1A with two containers, one small and one quite large, and two neatly wrapped presents. Kirishima, Mina, and Denki ran up to him and surrounded him. “Hey Bakubro, what’s in there?”

“…Do not call me that. And that’s none of your business—” and the explosive blonde was interrupted by a dumber blonde.

“This is a present for me?!” Denki squealed excitedly, grabbing the thin rectangular gift and ripping it into the wrapping.

“Huh…?! Is that a book?” Kaminari asked himself before it was aggressively taken from his hands. Bakugou places it back in the pile in his arms before placing it calmly on the counter before turning back to the other blonde and grabbing him by the collar.

“Why the hell do you think I’m going to get a present for you?! That was for (Y/N), dammit!” he huffed, grabbing the package and heading into the living room.

Mina and Kirishima caught up with him and asked, “Why? It’s not their birthday or anything.”

Ignoring them, Katsuki looked around the living room but when he didn’t see (Y/N) he turned to Kirishima and asked, “Oh shit hair! Where is (Y/N)?!”

The redhead shrugged and turned to Mina.

“I haven’t seen them since yesterday morning.

I was lying in bed playing music on my headphones. I know I didn’t solve anything, I was overly dramatic when I didn’t get a single birthday card; but if you get something every year, that one dose of luck and one year can do you no harm.

I heard a muffled slam of the door before a heavy rectangular object fell onto my stomach. I opened my eyes to see an angry Bakugou directly above me. I felt my headphones being ripped out and I yelped and sat up.